Play the video for a brief message 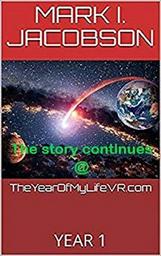 Click here to listen to episode #1
Also available for library loan
through Hoopla Digital
The Year of My Life:
reminiscences and rants:
Politics
is available on Amazon
Apple And Other Book Links

In YEAR 2, The Writer and Victoria take virtual reality to a whole new level.

Due to a computer error, there are times when Amazon will charge for my book. All other platforms are always free.

​TheWritersReality.com
"I look to a day when people will not be judged by the color of their skin,
but by the content of their character."  Martin Luther King

"An excellent novella about the inherent risks of cyber attacks with some otherworldly spice. Victoria is an excellent side character who provides an interesting twist to this light techno thriller."

is easy to read with

​"I love the cover! Reminds me of classic science fiction!"

​"I love the story line,

and can't wait to read

may be reproduced without the expressed written permission of the author. 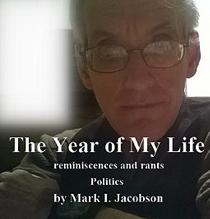 "Very concise and to the point, well researched and thought out, articulate and witty. It informed me and made me feel better at the same time. I heartily recommend this book to anyone."

Let me tell you a story. Before I moved to Las Vegas, I was a magazine feature writer in Los Angeles. My specialty was feature profiles of celebrities. It wasn't exactly what I had intended to do with my newly printed journalism degree, but it became a ‘when in Rome’ sort of thing. Over time, I found myself on a first name basis with several well known celebrities. That comes with the territory. More importantly, I was on a first name basis with several movie studio gate guards.

At times, magazine feature writing could be glamorous. The rest of the time, I sat in front of a manual typewriter and wrote 3-4,000 word personality profiles. That part wasn't so glamorous, especially when there was a deadline looming and I was suffering from a mild case of writers block. Those were the times when being on a first name basis with movie studio gate guards was a little more important than my ability to get chummy with celebrities.

A quick fix was to drive a short distance from my home in Sherman Oaks, to Burbank movie studios. The gate guard would always let me in and I would spend the next hour or two driving around backlot streets. A left turn would take me into World War 2 France. A right turn became early 20th century Brooklyn. Sometimes, I ended up in Hazzard County while The Dukes of Hazzard was shooting an outdoor scene. The rotating red lights signaled there was an action sequence occurring on a “hot set.” It was a studio requirement that I turn off the car engine until the flashing stopped. I would watch them shoot a few scenes and, after awhile, my writers block would crumble and I would head home to complete the designated writing task.

Movieland fantasy worked out great during the day, but I'm a night owl. I had a slightly different cure for a nighttime bout of writers block. I lived off of Ventura boulevard, one of the main roads running through the San Fernando Valley. It stretches from Universal City, about four miles east of where I lived, to its termination at Topanga Canyon, ten miles west of there. There were nights when newspaper editor Horace Greeley’s advice of “Go west, young man” was just what the doctor ordered.

It was on one of those nights that the unexpected happened. I had driven to the end of Ventura boulevard and was on my way back. As always, there were very few cars on the road around midnight. As I entered Encino, about four miles from my home, a number of red lights started coming up behind me. I pulled over to the curb in front of a Ralph's supermarket and racked my brain for an explanation as to why this was happening. I hadn't exceeded the speed limit and, as far as I knew, both my tail lights were just fine. Vehicles with flashing lights surrounded my car as all the occupants exited with their guns drawn. A shouted request was made for me to put my hands out the open window and I complied.  One police officer approached my car and shined a flashlight on the back seat.

“What’s that?” he asked, referring to the metal tubes nestled side by side.

The sternness in his voice told me that my trademark sarcasm might not be appreciated at this moment in time. This was a hot set, and I didn't care for it to become any hotter.

“I'm handicapped. Those are my crutches.” I tried to remove any hint of inflection from my voice.

After a few questions as to why I was out that night, he asked for my drivers license and walked back to the cruiser parked directly behind me. A few uneasy minutes later, he returned. Handing my license back to me, he imparted some advice that sounded almost fatherly in tone, as he asked me if I planned on stopping anywhere on my way home.

“I would suggest going straight home because it's possible you may get stopped, again.”

I assured him that I would, but the reporter in me had to know why I had suddenly become public enemy number one. Apparently, some moron had decided to even a score by using a shotgun to blast out a living room window, near Topanga Canyon road. It had happened within minutes of me leaving the area to return home. A witness had described a young, Caucasian male driving a tan hatchback. It was a simple case of being in the wrong place at the wrong time. An unexpected event that occurred in total darkness, had turned me into a suspect based solely on the car I drove and the color of my skin.  The fact that I am able to relate this once in my lifetime incident in detail, speaks volumes about the impact it had on my life.

Now, imagine if this scenario wasn't a once in a lifetime event. What if it happened several times a year? Would you become angry and defensive? Many people of color are judged not by who they are, but by the color of their skin, the car they drive, or the neighborhood they are in at that particular moment. The content of their character is decided before they open their mouth. They are judged by stereotypes and previous experiences with people of the same color. They become the recipients of irrational fears and inferior expectations. They become the enemy. It’s also a two way street.

As we get ready to enter a new year, I find myself asking the same question I ask this every year around this time. Can we be fixed? Martin Luther King’s words have never rang out more true than they do today. I wonder if there will ever come a time when we stop viewing people who are different from ourselves, as mirrors of our own insecurities. I wish all who read this weekly blog, a very happy new year. I will close as I close every week — You are not just a human being; you are also a representative of the human species.

Beginnings! Conversations that keep you talking

​Around The Writer's Block Live!

YEAR 2 will be out soon. Here's a sneak peek at an early draft of the prologue. I should mention that it doesn't give away details of the adventure. Just like the last book, it sets the tone and gives you a little more insight into the main character -- The Writer. I hope you enjoy it.

A new book in the 'The Year of My Life: reminiscences and rants:' series.​